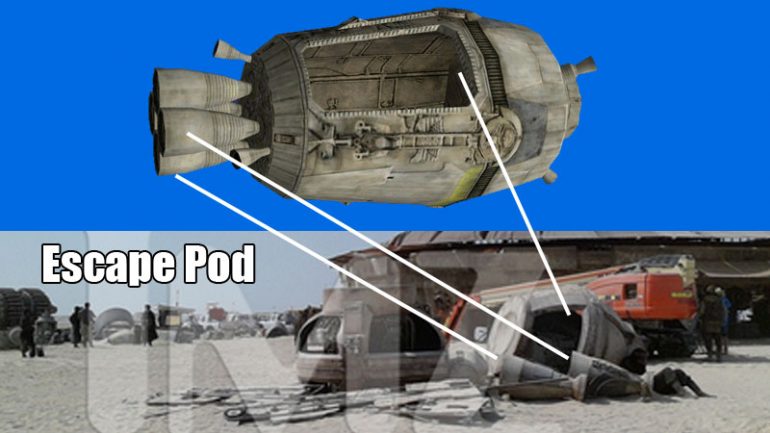 Upon close examination of the recent spy photos published on TMZ (link), I discovered a number of cool details that I almost overlooked! Here they are:

In fact, that is not an X-Wing fighter! Although similar, this prop has only one big engine on each side, not two like on an X-wing fighter. In fact, the fighter might be inspired by Ralph McQuarrie’s original design of the X-wing fighter:

In McQuarrie’s original design, the engines split in half when the wings split into attack position.

This blue-grey panel next to the Millennium Falcon under construction looks exactly like the back panel of the control station from which Han Solo once warned Threepio to never upset a Wookiee.

The mysterious smoke on the set in Abu Dhabi is eerily similar to the smoke rising from the Beru homestead after it was destroyed by the Empire.

This sign, on the broken fence around the market set in Abu Dhabi, says “Warning” in Aurebesh. Probably because it was once electrified.

The big engine on the set of Abu Dhabi might have once been used in the famous pod races on Tatooine.

What looks like random junk in the sand might actually be a broken escape pod! You can see the open hatch and the propulsion engines beside it.

The impressive gate at the entrance of the market set comes straight from Ralph McQuarrie’s paintings of Jabba the Hutt’s palace!

Two circular objects in the sand look very much like smaller versions of the shield generators we saw on Hoth. Perhaps they were once used to generate the power for the electric fence around the Hutt palace.

Listen to our detailed analysis of all the spy pictures in the newest episode of our show “Secrets of Star Wars”!

Have I missed any important details? Can’t wait to hear what you have discovered in the TMZ photos. Let me know in the comments!