The Secrets of Star Trek is a fan celebration and discussion of the long-running TV and movie franchise that looks at all of the TV series, movies, and other properties going back to the Original Series and right up to all the new Star Trek being produced today and in the near future. Secrets of Star Trek takes an episode-by-episode deep dive into all the completed series (The Original Series, The Animated Series, The Next Generation, Deep Space Nine, Voyager, and Enterprise), the movies, and all that is still being produced (Discovery, the new Picard series, and beyond). Join Jimmy Akin, Domenico Bettinelli, and Fr. Cory Sticha as they dive into the hidden layers and deeper meaning of Star Trek.

Get the official Secrets of Star Trek shirt. Join Jimmy, Dom, and Fr. Cory on the starship Enterprise boldly going! Find it at sqpn.com/merch. 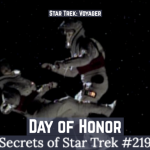 Day of Honor (VOY) - Klingon culture! Jimmy Akin, Dom Bettinelli, and Fr. Cory Sticha discuss this episode that not only gives us more Klingon background, but also explores the mercurial B'Elanna Torres and her budding relationship with Tom Paris, as well as the ways 7 of 9 disrupts the ship's routine. 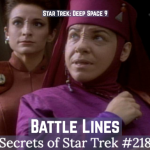 Battle Lines (DS9) - Bye Opaka. Jimmy Akin, Dom Bettinelli, and Fr. Cory Sticha discuss this DS9 story highlighting the good Kai and her role as a peacemaker; the recurring Trek trope of wars that never end; and the morality of causing people's deaths to end their suffering. 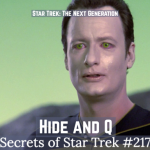 Hide and Q (TNG) - Ultimate power! Jimmy Akin and Dom Bettinelli discuss this Q story in which the powerful being plays with the Enterprise crew and lets Riker experience what it's like to have ultimate power. The results are somewhat cringey. 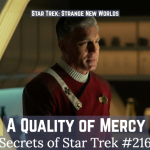 A Quality of Mercy (SNW) - Crossover! Jimmy Akin, Dom Bettinelli, and Fr. Cory Sticha discuss the Strange New Worlds season finale that essentially remakes one of the best Original Series episodes and features some of our favorite characters, plus they discuss their take on the season as a whole. 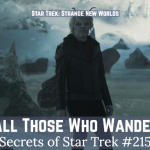 All Those Who Wander (SNW) - Star Trek does Alien and Predator! Jimmy Akin, Dom Bettinelli, and Fr. Cory Sticha discuss this story that looks very familiar to scifi fans, and includes characters confronting their internal conflicts and a major sacrifice among the crew.
See ALL EPISODES

See Our Discussions by Trek series and original episode airdate: