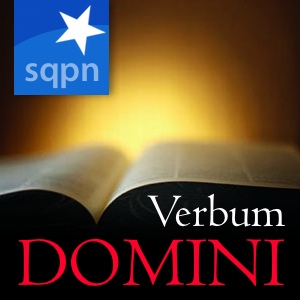 After nearly eight years of daily episodes, SQPN’s Verbum Domini show is coming to an end. Created by Brian Noe, produced for many years by David Sweeney and Pat Denny, and using the voices of numerous volunteer lectors, Verbum Domini provided each day’s Scripture readings used in the celebration of the Mass.

Verbum provided a unique service in its early days as the only daily Mass readings podcast. In recent years, however, the US Conference of Catholic Bishops began providing its own official podcast of the daily readings and had the advantage of using the version of the Lectionary that most US Catholics heard in their churches. Verbum was forced to use public domain translations of Scripture in order to avoid paying costly licensing fees.

Following much deliberation and consultation between SQPN, David and Pat, and Brian, we have come to an agreement that the time is right for Verbum Domini to end its work. The last episode of the podcast will go out on Saturday, March 5, 2016. If you’d like to continue receiving a daily podcast of the day’s Mass readings, we suggest the US bishops’ podcast, to which you can listen online or subscribe in your favorite podcatcher app. They also make them available in video format

Since 2005, SQPN has provided a variety of audio and video shows that explore the intersection of entertainment and culture with spiritual realities and the Catholic faith, including such hot topics as Star Wars, Lego, and living a fulfilling life. SQPN reaches an audience that spans the globe, from New Zealand and Australia to the Vatican and Europe to the United States and Canada. To learn more about SQPN and its full slate of programming, visit SQPN.com.